30 Cutest Churches in the World 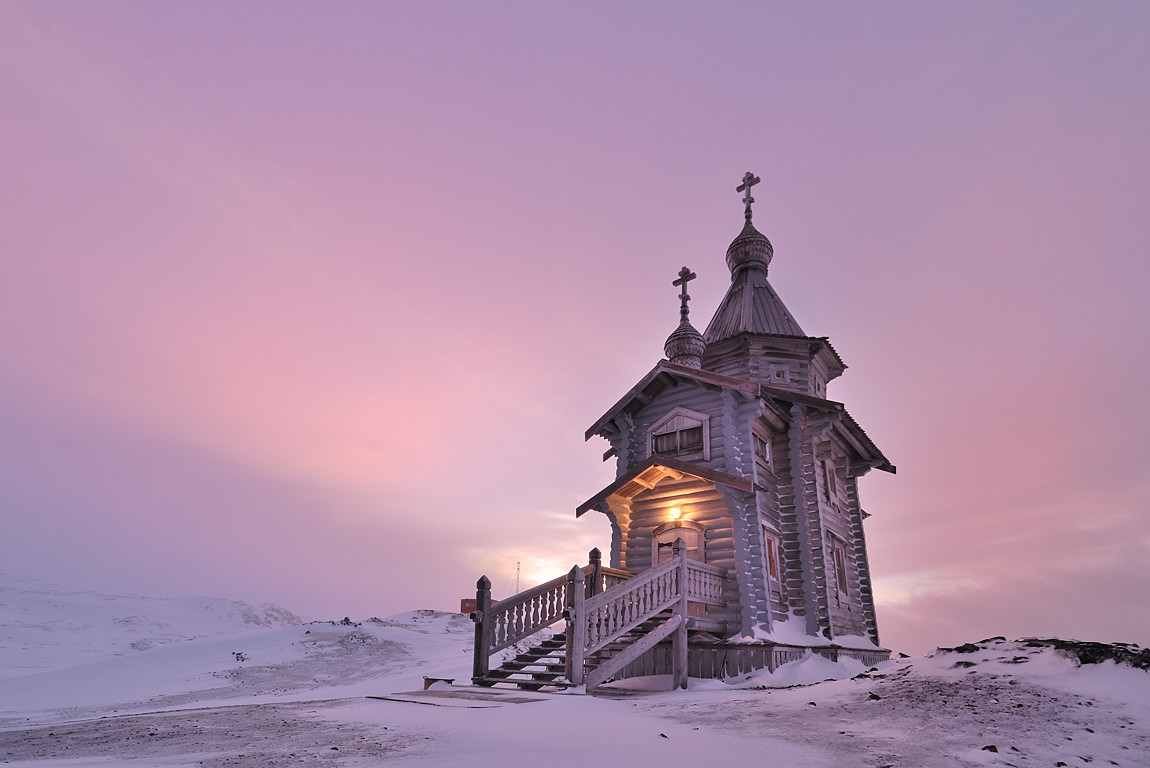 I’d be willing to bet, that if a poll were taken of the world’s most beautiful churches, the list would be of the great cathedrals in Greece, the Holy Land, Serbia, Romania, Bulgaria, Ukraine, and Russia. While of course the grand and stately churches and cathedrals we conjure in our minds are in fact beautiful, there are many more that are no bigger than a standard American two-car garage.

The following 30 photos take a tour of the theology of space, and how it gets really personal the smaller it gets. Enjoy! This chapel in upstate New York was a labor of love for Charles “Ed” Scherneck, who spentt twenty years building it completely from scratch. Unfortunately, it was left unfinished at the time of his death in 2003, and was auctioned off in a state of disrepair last fall. Built entirely of real Siberian Pine, this Holy Trinity Chapel was reassembled half a world away from its original construction to serve Russian researchers in Antarctica. The chapel inside Athens International Airport, though officially nondenominational, puts a particularly tasteful spin on Orthodox modernism. Hopefully it provides much needed peace from the stress of travel. St. John’s Monastery shows how a beautiful Iconostasis can go a long way – balancing Orthodox spirituality with some HGTV sensibility! This chapel is housed in the last car of a fully-equipped hospital train which makes monthly trips on the Trans-Siberian railway to serve communities with little access to either health or pastoral care. This chapel was built on the NATO base in Kandahar, Afghanistan based on designs of wooden Romanian Churches from Transylvania. It has served as the home parish for countless soldiers deployed to Afghanistan. This church sits atop the “Economic Gates” of the monastery hardly has enough room for a small car to pass below. According to ancient Ukrainian architectural custom, a church was built over every gateway into a fortress or city. This was done for two reasons: firstly, to remind a visitor from outside of the city that they were entering a holy place, and can thank God for arriving safely, and secondly, for people to pray for protection before venturing out into the unprotected wilderness beyond the city limits.

8. Church of the Mother of God in Biały Bór, Poland This church was designed by Jerzy Nowosielski, a Polish graphic artist and iconographer in the mid 1990s. Critics condemn this church’s unconventional design, but Nowosielski dug deep into the theology of Early Byzantine Liturgical spaces. He was also inspired by the timeless drama he found in Liturgy, “as a person who is well nigh obsessively concerned with liturgical questions, I consider the Christian liturgy to be a transformation of the Greek theater.” As such, the arches, stairways, and columns directly allude to ancient Greek stages. Built into the arches of the former waiting area of an abandoned train station, St. Seraphim also hosts one of the most sought-after schools of iconography in the United Kingdom.

This charming chapel sits deep in the Pyrenees and sponsored by the local Roman Catholic Diocese as an act of good will to the small local Orthodox community. The wooden construction was built in Russia, then shipped to its current location in four modular pieces. Dedicated to the intercessor of sailors, this chapel sits inside of the Greek Navy’s flagship. This secluded monastery hosts a beautiful chapel with some striking iconography in a really intimate space.

13. Church of the Three-Handed Mother of God in Tallinn, Estonia Carved out of a medieval arsenal, this tiny church dedicated to the icon of the Three-Handed Mother of God has a beautifully rustic iconostasis. This teeny church in Romania shows the best of religious folk art.

15. Chapel of St. Michael the Archangel in Hungary This chapel was dedicated in 2001 in the attic of a formerly state-owned library in Hungary. 17. Monastery of St Antony and St Cuthbert in Shropshire, England This monastery chapel is a truly meditative place part of a monastery in the heart of rural England. The icons were written by the hand of Aidan Hart. The Emmaus House is a refuge for homeless in Harlem. Not only can they go to the Emmaus House to pray, it’s also the most active Eastern Christian food pantry in New York. This pilgrims’ chapel is misleading in size, but look at the Cathedra on the right, and it’s clear that a normal-sized priest wouldn’t even fit under the Iconostasis without bending his neck.

20. Monastery of the Transfiguration in Ellwood City, Pennsylvania This monastery chapel achieves the intended effect of making the faithful feel like they’re surrounded by the mysterious and comforting presence of God. Another pilgrims’ chapel in the Holy Land, this one is carved in a cave not too far from where Jesus was born. Meant to be an ecumenical house of worship, the Shrine, as its known, hosts a series of small prayer rooms for members of various faiths. This chapel offers an interesting social commentary on what it means to be royalty, and where the sanctuary is in relation to the nave. A former rec room, this family decided to create a chapel to one of the greatest monastics in their own home. It gives whole new meaning to “the domestic Church.” The line between beautiful and gaudy was crossed by Ukraine’s former president when he built this chapel attached to his bedroom. Notably, he completely leveled what remained of a 10th century women’s monastery to build this monument to himself. Not all church constructions are well-intentioned, unfortunately. Beautiful in its simplicity, the sun illuminates the sanctuary of this monastery chapel.

27. St. Nicholas Chapel in a suburb of Kyiv, Ukraine. This chapel was built in a village outside of Kyiv for people who don’t think a church can ever be too close to home: the back yard. This chapel of St. Barlaam was dug out in the eleventh century and rests more than sixty feet below ground. The holy imperishable relics of St. Barlaam, who lived and died in same place as this chapel is today, rest to the right of this picture, out of frame. He is known for being the first abbot of the monastery. Tucked between office buildings in Toronto’s financial district, this chapel provides an intimate setting for prayer amid the city’s bustle. Part of a monastery complex in suburban Detroit, this chapel welcomes visitors from the imperial-Russian-inspired restaurant next door.