Being Orthodox in a Non-Orthodox Family 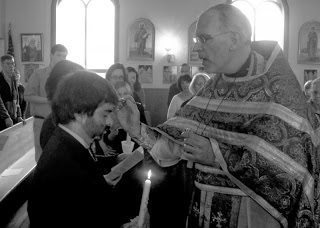 “So… how did you become Orthodox?” For a lot of Orthodox college students, this may seem like a silly question; they have always been Orthodox. Their family is Orthodox, they grew up in an Orthodox church, and so it felt only natural to identify themselves as an Orthodox Christian during college. However, there are also a growing number of converts, people who did not grow up in the Faith. Their responses can vary widely, with people coming from a myriad of different religious backgrounds (or lack thereof).

I converted to Orthodox Christianity at the end of my senior year from Congregationalism, making myself the only Orthodox Christian in my immediate family. Even in my extended family, the only Orthodox portion was my aunt (and subsequently her two children), who married in to the family. Everyone else was either Catholic or Protestant. I was very fortunate in that my family was very supportive of my conversion. My parents (and my extended family for that matter) were always just focused on me having a spiritual life, and the exact manner in which I expressed that was secondary. This didn’t stop a couple of sarcastic jabs here and there, particularly regarding the “replacing” of my godmother, as they chose to put it, but this was more in an attempt to give people a hard time, rather than being closed-minded.

Though my conversion was generally well-received, it did make for a bit of an awkward transition when it came to certain parts of the liturgical year. Two particular components spring to mind: fasting and Pascha. Fasting, as we view it in the Orthodox Church, is often absent or scaled down in other forms of Christianity. Over time, people develop strategies for following fasting rules, coming up with new or modified recipes, and creating a general plan for how they will eat. Without this background, the whole fasting process was initially overwhelming for me; I had no idea where to start. As for Pascha, it was very strange for the rest of my family to celebrate Easter, while I was still in the middle of Great Lent. It seemed that we were rather abruptly separated on to two conflicting paths.

To put it bluntly, these issues made me feel uncomfortable. I began to question what I had gotten myself into by converting. I couldn’t really ask my family about it, since they had no frame of reference by which to help. So, I had to look elsewhere. Here’s a quick breakdown of what I learned from all of this:

Following an Orthodox Christian lifestyle is hard–worth it, but hard. Much is asked of us, and there are times where we will struggle. Especially for converts, we may not necessarily have some of the same “conditioning” as some of our peers who have grown up in the Orthodox faith; we are simply newer to the system. This can certainly be frustrating, but it should not deter us from meeting these challenges with confidence and a desire for spiritual growth. By using the resources we are given–through OCF, our parishes, or simply those we meet along our way–we can not only spiritually improve ourselves, but help to strengthen the faith of others. OCF at University of Connecticut

This is a guest post from Eddie Ryan. Eddie is a second-year Master’s student at the University of Connecticut studying Biomedical Engineering. He serves as the Social Media Student Leader on the 2013-2014 Student Advisory Board and as the Event Coordinator for UCONN’s OCF chapter.