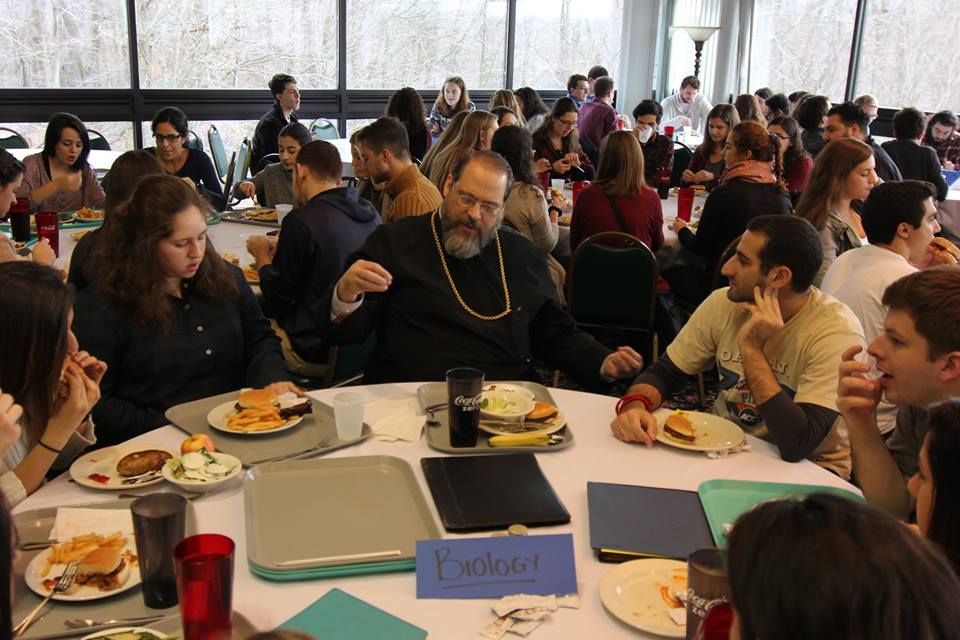 Okay, so if you didn’t come to College Conference East, that’s really a shame. There were daily services with full choirs and beautiful chanting—all the way into the night. There were scheduled icebreakers with both your region and random groups where you could meet new friends, and free periods, where you could greet old ones. There was the lively steadfastness of Fr. Tim Hojnicki as he taught us the best answers to common questions about the faith; the carefully considered and fluidly presented recommendations of Steven Christoforou (the Be the Bee guy!) in regards to being Orthodox on and through social media; and there was the solemn sincerity and almost-accidental wit of Sister Vassa, the keynote speaker, as she meekly gave us great insight on what it means to be a martyr, and other various speakers.

I could probably spend the rest of this space talking about everything that went down at College Conference East—the big, life-changing ‘Aha!’ moments of divine inspiration, and the little, fleeting moments of friendship or joy that you couldn’t forget if you tried. I could write and write and write about all the things that happened at College Conference—instead, I want to write about the things that didn’t.

I want to write about the things that didn’t happen at College Conference, because the words ‘safe space’ get thrown around the college environment a lot, and that can get tricky. A safe space is often a place wherein you can be honest without embarrassment, and that’s pretty cool, because it can be really tough to be Christian—especially, I would guess, Orthodox Christian—in college. Sometimes, it’s dragging your butt to an unfamiliar parish that’s forty minutes away when you didn’t do evening prayers last night cause you knocked out at 3 AM; sometimes, it’s the one person in your hall/floor/house/dorm that looks you straight in the eye and says, “So you think all gay people are evil.”

A safe place is also a place wherein an opinion is protected—often an opinion that is new, unusual, and championed by a minority. This is where safe spaces get tricky. You and I both know that being a Christian isn’t exactly all the rage in college. Sometimes, safe spaces can become a megaphone for things with which the Church fundamentally disagrees. Sometimes, safe spaces become an opportunity for those who, having felt oppressed and discriminated against and silenced, would like to lash out.

The first thing we should do, I think, is probably have mercy and forgive and love those people, because that sounds like, super Orthodox-y, so I’m just gonna roll with it. The second thing we should do, though, is recognize that a ‘safe space’ isn’t always a ‘safe space’ for everyone. We Orthodox aren’t hip and happening—we’ve been around a long time, and we haven’t changed too much. That’s not to say we can’t be hip and happening: if we were to demonstrate, wholly, the love and forgiveness and mercy and compassion that we’re taught to live through Christ, then I think Orthodoxy would fly off the charts.

That’s why I want to talk about what wasn’t at College Conference East. When you sat down for a meal, the two gentlemen sitting at the table next to you weren’t discussing their weekend’s ‘ravages and spoils’—words I just heard, as I type this in the dining hall. When you crossed yourself and took a second to thank God before your meal, the young lady sitting across from you didn’t scoff—an encounter I had two days ago at dinner. At College Conference East, when you did evening prayers, it wasn’t to the sound of your next-door neighbor and his girlfriend…recreating, it was to the sound of ten, twenty, thirty voices chanting in the chapel for hours—literally, hours—on end. His Grace joins the biology students during “sit with your major” lunch.

Being Orthodox requires some bravery. The theme for College Conference East this year was ‘Modern Martyrs: Witnesses to the Word’. Martyrdom? That took a degree of courage only achieved through a deep-seated love of Christ. We won’t need the courage to die for our Lord (hopefully), but being a witness to the Word in college is, in its own way, a martyrdom—it’s a martyrdom, and we’re gonna need some gumption, a little bit of grit, a merciful, unassuming courage to pull that off. And courage doesn’t last forever, so that’s why we have prayer and fasting and church and OCF and College Conference. To be weak and human before God, and ask Him to help us out, to give us the courage to keep going.

njamin Solak is a undeclared first-year at the University of Chicago. He’s a fan of football, priests who dish out communion really fast, and brightly-colored pants. He invites you to check out his personal blog on Christian living and personal development at benjaminsolak.wordpress.com