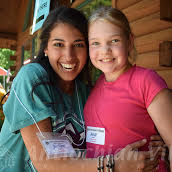 Every month, the OCF social media platforms will be featuring one of the nine regions of chapters. January is the month for the Northeast Region, which includes the wonderful states of Vermont, Massachusetts (congrats Pats fans), Rhode Island, Maine, the provinces of western Ontario and Quebec, and the brand spankin’ New Hampshire, York, and Jersey.

On the blog, I’ll be asking the Regional Student Leader–for Northeast, the indomitable Spyridoula Fotinis–for a few names of people in their region who are absolutely rockin’ it. It’s an opportunity for every region to showcase and share that which makes them unique and awesome, and hopefully all the regions can learn from and grow with each other.

So, without further ado, your Northeast All-Stars! My name is Stephanie Katartzis. I grew up in Bethpage, New York and am currently a sophomore in a six-year pharmacy program at the University of Rhode Island. I am the president of the OCF for my chapter– one that was just freshly formed (yay!). However, this semester you can catch me studying abroad in Rhodes, Greece!

Entering college as a freshman, I was disappointed to find out that my school did not have an OCF chapter, nor an Orthodox Christian Church that was easily accessible without a car. I was determined to find other students on the same boat, and I also reached out to the parish members from the nearest Orthodox Church, St. Spyridon. Through God’s works, I found several other students motivated to start an organization on campus, and I was blessed to meet families that were more than willing to give me and the other students rides to church. Now, coming into my sophomore year, we have close to ten active members and a dedicated, amazing advisor, Fr. John.

What are some of your greatest memories/experiences from OCF?

College Conference East 2015 played a big part in inspiring me to start an OCF chapter on my campus. There is nothing more satisfying than being immersed in tons of fun events and enlightening workshops with close to 300 other students of the same faith. Chartering a chapter at my school was my way of bringing a piece of CCEast back with me. I’m a freshman accounting major at Seton Hall University’s Stillman School of Business. In my free time, I enjoy playing on Seton Hall’s Men’s Club Ice Hockey team, watching sports, and fishing. I intend on being the treasurer at Seton Hall’s OCF chapter.

Tell us about your OCF story.

I got involved in OCF after I joined a Coptic Orthodox group at Seton Hall, called Seton Hall Orthodox Fellowship, thinking it was OCF. I then proceeded to find the Seton Hall’s OCF chapter, only to find out the club’s creation had been halted last year. Because Seton Hall is a Catholic university, all religious clubs must be approved by campus ministry, and campus ministry did not see a need for two Orthodox clubs, as the Coptic Orthodox club had already been formed. I met with the students that tried to form the chapter last year, and still we had no solution to this problem. Fortunately, about halfway through the first semester luck turned our way as we discovered there was a new director of campus ministry. We are in the process meeting with the new director, and can only pray he is more open to the idea of having two Orthodox clubs on campus.

As of now, Seton Hall is without a chapter, but graciously enough, president of New Jersey’s County College of Morris chapter, Spyridoula Fotinis, has invited Seton Hall students to join in their chapter’s activities. I would like to thank her, on behalf of all Seton Hall OCF students, for this.

Since our OCF chapter is in the process of forming, I would actually appreciate any tips from treasurers in other OCF chapter treasurers. You can contact me at ncizin11@gmail.com.

What positive experience have you had with OCF?

My favorite OCF experience thus far was College Conference, hands down. I enjoyed College Conference so much because of the people I was able to meet. I met Orthodox students from all different ethnic backgrounds, and got a taste of their cultures, like I never had before. I also surprisingly met students from Seton Hall that I had never met before. Finally, I met lots of wonderful people that were willing to lend advice and support in regard to the issues we are having with campus ministry. Other students, whose OCF chapters share their school with similar Coptic Orthodox clubs, offered advice on keeping a positive relationship with them. I even got a chance to speak to His Grace, Bishop Gregory, who was more than happy to assist in our OCF chapter’s creation, should we encounter problems with the new director of campus ministry. Hi! I’m Eleni Florakis and I’m a pre-med senior, majoring in Integrative Neuroscience and minoring in Global Studies. I’m originally from New Rochelle, NY but currently attend Binghamton University, where I am President of the OCF there. In my free time I enjoy playing piano and flute (which I also play in the Binghamton University Orchestra), running, hiking, playing intramural volleyball, reading, and travelling.

I first heard of OCF from my older brother and was super excited to join in my freshman year. However, when I got to Binghamton University, I was disappointed to find out that OCF did not exist on Binghamton’s campus. That is when it became my mission to start a chapter. Starting out was definitely rough, and it was hard to find the time to devote to this worthy cause. Because of this, it took a couple of tries, but the persistence was definitely worth it. I am very excited to say that Binghamton University’s OCF is now in the process of getting officially chartered by the school!

Something cool that goes on throughout the semester that our OCF helps out with is a Community Meal Service at St. Michael’s Orthodox Church in Downtown Binghamton. This occurs every Monday of the week, where over 100 community members come to enjoy a hot, three-course meal. Our OCF students help with setting up, serving food, cleaning up, and conversing with the community members. It’s a very humbling experience and a great way to serve our community!

My advice is to never give up! I know it can be disheartening at first to try and find enough members to become an active club, but don’t worry. With some prayer and determination, it will all eventually work out and more members will join! Hi, my name is Justine Younes and I am a fourth year Engineering Chemistry student at Queen’s University in Kingston, Ontario Canada. I am also the Chapter President/Co-Founder of Queen’s OCF, which we started just two-and-a-half years ago, and our chapter has already grown to twelve regular members. Glory be to God! Something cool about our chapter is that we only became an official school club THIS year (WOO!), so you can say we’ve been like the “underground Queen’s OCF” for two years, and had to get our OCF faculty member, a professor at our school, to book our rooms for us! Shoutout to Dr. Ana Siljak <3

Yes! Canada! We love Canada! Tell us about your OCF story.

After my first year in University, I remember feeling like something was missing from my life. Growing up I was always involved in Teen SOYO and loved being super involved in the church, but once I moved away for school, I never thought I would miss it that much. Well, one “hitchhike to church because I didn’t think 5km was a long walk and I didn’t want to miss Liturgy” later, I quickly realized how much I needed the church in my life. I had heard of OCF from my church community, so I knew that’s what was I wanted at Queen’s, I just didn’t know how to do it. So when the first Sunday of my second year rolled around, and I noticed a kid my age in the small St. Gregory of Nyssa mission church, I knew exactly that it was meant to be. He (Victor) was a first year at Queen’s University, and when I mentioned OCF to him, he immediately expressed his interest and enthusiasm to the idea! How God works! There was also a new priest, Fr. Mathew, who came that year to do his PhD at Queen’s, and he was very willing to be the spiritual adviser of our group! How God works again! And then our lovely faculty member (Ana, who was mentioned earlier) booked a room for us every week! So, by the will of God and through His many blessings, our underground OCF chapter began.

Every year, the OCF chapters in our area take a trip to a monastery in Montreal for a chance to visit and meet other students in OCF at other schools. It is something our chapter always looks forward to, and it is so special and important for people our age to visit monasteries and to explore the other path that God has laid down for us. It is also just the most beautiful place to find peace and refuge from the world, which is ideal for retreat settings and meeting and connecting to other students that are struggling in the faith and in the same situation as yourself.