Get to Know the Church Fathers: St. John Chrysostom 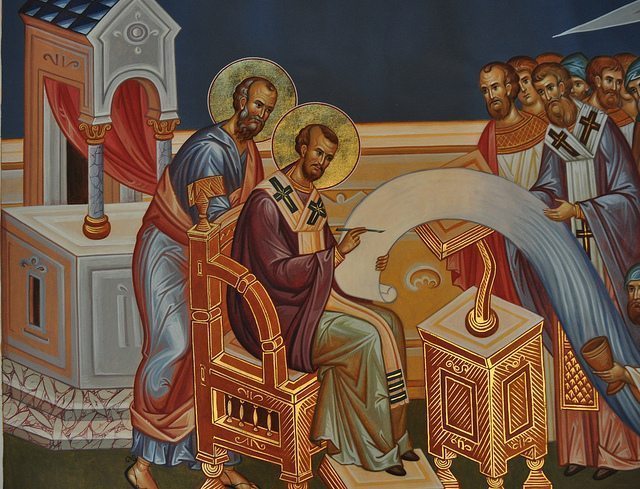 St. Paul whispering in the ear of St. John Chrysostom as the future fathers of the Church gather to drink from St. John’s wisdom.
CC image from Ted on Flickr.

There is no way I can possibly do proper homage to this saint in one short blog post–the Church can’t even do it in one feast day! We celebrate St. John three times every year: November 13 for his own commemoration, January 27 for the translation of his relics, and January 30 along with St. Basil the Great and St. Gregory the Theologian on the the Synaxis of the Three Hierarchs. And that’s not counting the hundreds of times a year the Church commemorates him in the services as part of the dismissal prayers. I mean, he’s kind of a big deal.

St. John was raised by his Christian mother who was a widow and received a high-class “secular” education from the greatest scholars of his day (who were, by the way, pagans). Although it seemed that John would have a career in rhetoric ahead of him, he decided instead to dedicate himself to God as a monk. Extreme asceticism was not the path God had in store for him, however, and due to illnesses brought on by his ascetic lifestyle, he returned home to Antioch where he was ordained a deacon and later a presbyter in Antioch. It was as a priest in Antioch that he became chrysostom or “golden-mouthed,” known for his convicting sermons and thorough commentaries. Today we still have 1,447 of St. John’s sermons and 240 of his letters! I get a writer’s cramp just thinking about it.

Eventually, St. John was made the Patriarch of Constantinople, but it was not to be an easy road for him. Preaching against the moral laxity of the Empress Eudoxia, St. John got himself exiled twice, ultimately dying in exile. His famous last words were, “Glory to God for all things.”

The lasting impact St. John has had on our faith and our Church can hardly be measured. In addition to his homilies and letters, we have from this giant of a man a number of treatises on everything from heresy to monasticism to the priesthood. Oh, and then there’s that little service we do just about every day somewhere in the Orthodox world–the Liturgy of St. John Chrysostom.

Countless later Church Fathers, bishops, priests, preachers, and scholars have looked to St. John for advice on Scripture, ethics, marriage, ordination, raising children, guiding parishes, writing sermons…the list just keeps going. If you ever have a question about our Faith or are confused when reading the Bible, there’s a pretty good chance St. John can help you out, too.

Check out his complete works, or, if that’s just a little too much all at once, you can try these volumes which are collections by topic:

On Wealth and Poverty

On Marriage and Family Life