Jesus Christ – The Tree of Life and Source of our Unity

“Behold now, what is so good or so pleasant as for brothers to dwell together in unity?” Psalm 132:1 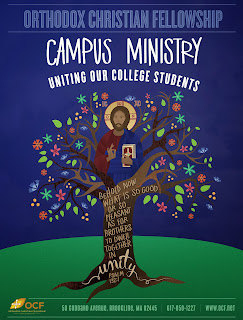 This year’s theme for OCF and the 2013-14 Academic School Year comes to us from the Psalms and reflects the importance of brotherly and sisterly unity, within the context of God’s faithful people. While it is certainly good for those outside of the church to act unified and to work towards the common good, the unity of the Orthodox Christian Faithful is altogether something different and far more profound. For our unity is not based merely on a desire to be unified, but rather reflects an actualized unity, one grounded on worship, practice, and a coherent vision of Jesus Christ our Lord as sanctifier, author, and Light of the world as revealed by the One, Holy Catholic, Apostolic and Orthodox Christian Church.

It is for this reason that our symbol and image for this glorious and Christ revealed theme mirrors the icon commonly referred to as the “Christ the Tree of Life Icon” or the “Christ the True Vine Icon.” Traditionally, this icon includes the images of the Holy Apostles, whom Christ commissioned, trained, and charged to preach the Good News to the whole world. In the image from our theme, you will see that just like in the icon itself, Jesus Christ is the center of the image, the Life and Source of everything around Himself. In His left hand He holds the Gospel of the Good News and New Testament and with His right He blesses us as He is the true Archpriest and Archbishop, with His hand in the traditional position of IC XC (Jesus Christ). Within His halo are revealed the characters which tell us that this is the Lord, indicating the expression “I AM,” alluding to the fact that He is the One and Only True God and no other, just as was revealed to Moses at the burning bush.

Here in North America, the issue of Orthodox Christian Unity is an important one and it is important to every one of our beloved Orthodox Christian Hierarchs here in North America as reflected by their participation and unity as expressed by their inclusion in the Assembly of Canonical Orthodox Bishops of North and Central America. How each individual expresses his or her understanding of Orthodox Christian unity must be left to each person, but to deny that it is essential and required is to deny the Holy Apostle Paul Himself, who said in his letter the Corinthians, “Now I beseech you, brethren, by the name of our Lord Jesus Christ, that you all speak the same thing, and that there be no divisions among you; but that you be perfectly joined together in the same mind and in the same judgment.”

Where we go astray as individual Orthodox Christians is when we fail to express or make efforts toward that unity or even ignore it altogether. Just as tragic, there are those on the other hand who too often force the issue to the detriment and exclusion of Christ and His Grace, ignoring that all must be done in His time. This is where our Orthodox Christian College Students in North America can help to make all the difference. As a unified group of Orthodox Christian College students, they have the potential to witness True Christian Charity, to emphasize True Christian Love and to demonstrate the practice of Real Christian Unity. For real Orthodox Christian Unity does not ignore language, it does not ignore customs, it does not disband love, loyalty, or local traditions. Rather real Unity is reflected by a common goal in Jesus Christ and the sharing of His Good News to all of the world. He is both the Source and the Goal of the message and there is no other.  He is, must be, and will be the Source of our Unity, the center of our Tree, and the heart of our Vine!

On the Holy Day of Pentecost, the Holy Spirit descended upon the Apostles as tongues of fire, and we read the words of Luke in the book of Acts who told us “And they were all filled with the Holy Spirit, and began to speak with other tongues, as the Spirit gave them utterance.” The reason this passage is so important is because it reveals so much about our mission as well as the Holy Spirit’s very open approach to using all languages and dialects in order to teach, preach, and lead us to unity in Him. For it appears that the Holy Spirit despises no languages in particular, as we are sometimes led to believe. He does not despise Greek, Arabic, Russian, Ukrainian, Serbian, French, Spanish, German or even English. As the Source of man’s life our God does not despise the tongues of His people, though He would certainly despise their use to perpetuate sin or to harm one another, which is more often the case. The broader point here is that even among the apostles, who became miraculously able to speak different languages and learned to embrace different customs, traditions, and languages in order share Christ’s Gospel message more effectively, they were still intensely unified and understood that even while they ministered to those placed in their care, their unity was not destroyed or harmed in the least, but rather, affirmed.

The Apostles witnessed their unity as they lived and acted like branches from the Tree from whom Christ is the Source. Like branches they reached out, but never sought to sever themselves in any way from Jesus Christ or His teachings! So like the apostles, we too must reach out to the world, sharing the message while living it, demonstrating our Unity of Faith, demonstrating our mutual love and respect for one another as descendants of the different apostles through whose tongues, which were taught them by God alone, they shared the Gospel message of the New Testament and revealed the saving Grace of our Lord Jesus Christ! Christ is Amongst Us!