My First "World Tour" of Orthodoxy

This is a guest post from Tanya Schillawski, North American Student Leader of the 2013-2014 Student Advisory Board and a senior at Northeastern University. She got involved with OCF at school during her Freshman year, and joined the OCF Student Advisory Board in 2011. She will graduate from Northeastern University in 2014 with a Bachelor of Science degree in both Psychology and History.

I moved to Boston as a young, 18 year old freshman, eager to start at Northeastern University. I can remember my first day at my “new” church. I had plotted exactly how to get there on my map, knew precisely what “T” I needed to take—that’s Bostonian for Subway—and knew that I would arrive just in time for the Doxology before Divine Liturgy.

My new church wasn’t actually new to me at all; in fact, it was more of a homecoming. I was going to be attending St. Mary’s Antiochian Orthodox Church in Cambridge, MA, the church where my mother grew up, my parents were married, and where I was baptized. When I was two, we started going to a church closer to home. I knew some of my late grandparents’ friends who went to St. Mary’s—although four years later they still like to pinch my cheeks and remind my of my little blond pigtails. Though I didn’t know them very well, I knew that I would have someone to sit with and talk to during coffee hour on that first Sunday.

Having a pre-made community made that first outing to church bearable, and being familiar with the practices of the Antiochian Orthodox Church, I was prepared to take that step on my own.

At the same time, the Northeastern University OCF Chapter was just getting started; on a good day we had 3 members. What we did for our first Holy Week together we dubbed a “World Tour.” For each night of Holy Week, we went to a parish from a different Orthodox jurisdiction. On Sunday, we went to the Romanian church, on Monday: Bulgarian, Tuesday: Antiochian, Wednesday: OCA, and Thursday: Greek. We’re blessed to be in Boston where we have this ability, and some of them were within walking distance of our school.

By going to church with my OCF community—with people that I already knew—I was able to get my feet wet and experience the different practices that I hadn’t before. Each church was welcoming in its own way. For the first time, I went to a church that required that women cover their heads, and the iconography in the OCA church was unlike anything I’d seen before. It covered every inch of the building and every inch of my peripheral vision.

I still go regularly to my Antiochian parish, but I now like to go to other churches too. It’s an opportunity that I would probably not embrace if I hadn’t gone that first Holy Week with my OCF chapter, which brings me to today. 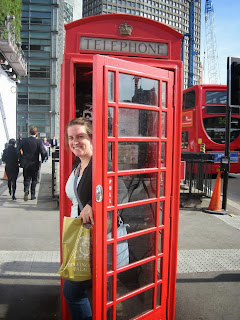 This semester, I am doing a semester abroad in London, England. I spent the first weekend becoming acquainted with the “Tube”—that’s British for Subway—before attempting to find my way to church the next weekend.

Some things haven’t changed since I was a freshman. The whole week leading up to my excursion to church I researched the closest parish and what Tube lines I needed to take; I knew exactly which train I needed (to not be late) and had compulsively checked the balance on my Oyster Card to make sure I would have enough money to get to church and back. While the morning was not without a few mishaps and wrong turns (that’s a whole other story), I made it to church, smelled the incense, and despite not knowing anyone and being thousands of miles away, I knew that I’d made it home.