Yesterday, I wrote about the importance of making it a habit now of giving back to the Church as young people. Well, today I have the privilege of sharing with you how an amazing group of young men decided to do their part and give back to OCF! 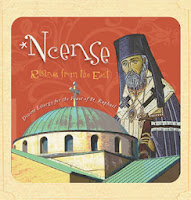 You may have heard of this Orthodox “boy band” or one of their three recorded albums of Byzantine chant. But maybe you didn’t know that the proceeds of every *Ncense CD goes—not into the pockets of the amazing chanters you hear on the albums—but to OCF. These young men are an example for all of us of good stewards of God’s gifts—giving of their talents as well as their income to edify and glorify God’s Church.

I had the pleasure of interviewing a couple of the founding members of *Ncense, John Abud and Chris Shadid, about *Ncense and OCF, and I’m happy to share with you their perspectives.

Thank you to John, Chris, and the rest of *Ncense for sharing with us and for being an example for the rest of us!

OCF: What gave you the idea for *Ncense?

John: So how the guys from *Ncense started singing together is amazing, but how the name came up is the silliest thing in the world. Most of the guys in *Ncense have dads that went to seminary together. Our families were all friends growing up. We would see each other at church conferences, which were pretty much our family vacations, at least once a year and our relationships developed that way. There are some challenges to being a priest’s kid—beautiful challenges, sure—but challenges nonetheless, so that helped us to form special bonds. One of those special bonds was our love of the church and especially its music. During retreats and conferences we would do what we called “rebel chanting”, which was to sneak into the church after hours (usually breaking curfew) to sing with each other. We were all very amateur singers and only a few of us even had experience in choirs at school or at church, but we soaked up the music of the church like a sponge. We encouraged each other and challenged each other and learned from each other. It was an imperfect system, but in the way it nurtured our love for the church and each other, it was perfect.

Naming the “founding members” is a bit difficult. There were a number of guys and girls that sang with us as we were growing up. Matthew Yazge was the first one to ever say the name *Ncense as a joke because of our boy-bandishness and our church-centric repertoire, but he never actually sang with us on any of the albums. Without the encouragement of our parents, especially Khouriyee Janet Shadid, we probably never would have thought about recording. But we made it over the hump eventually. The guys that sang on that first CD, Every Good and Perfect Gift, became the core group: Charles, Nick, and Chris Abdelahad; Chris and Steve Shadid; Nick and Michael Holwey; George Matook; my brother, Nick Abud, and myself.

Chris: John’s answer here is great. I’ll just add a little. Most of our dads went to seminary together, and a lot of THEM sang together in seminary. I think we “officially” started singing together when we were at the Archdiocese National Convention in Detroit in 2005. Most of us had just spent 2 weeks at the Antiochian Village Camp together. We were all kind of hanging out and got to talking about how much we liked church music and how we had some favorite songs, such as “The Angel Cried” and “Bless the Lord”. We quickly realized that among us we pretty evenly made up each of the 4 parts (Tenor 1, Tenor 2, Baritone and Bass). So we’d just kind of start singing a hymn and the rest would fill in the parts. Throughout the week at that convention we just kept singing together and having a lot of fun—church as well as secular music. The bishops even heard us singing and asked us to sing at the Order of St. Ignatius dinner—a banquet for a national philanthropic group within the Antiochian Archdiocese. I think that was our first “official” time singing as *Ncense. I remember Matt Yazge throwing out the idea of the name, and it just kind of stuck. As John said we would often resort to “rebel chanting”, and whenever we were together we would just sing together. We all love the music and we all love singing together.

OCF: Where did you all go to college? 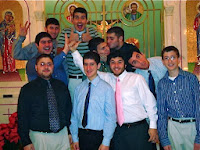 John: One of the miracles of *Ncense is how these guys from all over the place were able to come together and in a relatively short time put together some beautiful music. The music isn’t perfect, but we tried hard for our prayers to be perfect. Chris S. went to the University of Pittsburgh, Steve is at Duquesne. Nick H. went to the University of Illinois, Michael is at Bradley University. Charles and Nick Abdelahad both went to Northeastern University, Chris A. is at Quinsigamond Community College. George M. went to Worcester Polytechnic Institute. Nick Abud went to the University of Michigan and I went to Michigan State University. So we were all over the place and finding one time and place for us to all get together once some of us started getting into college was definitely a challenge, but we found a way.

OCF: How were you involved in OCF?

John: I went to Michigan State University for a 4-year undergraduate career as an English major. One of the first things I did upon my arrival on campus was seek out the MSU OCF at a student organization fair. We were a small group at that time, led fearlessly by a couple senior girls. We got along well and with the assistance of our spiritual advisor had a number of edifying experiences, including 4 members of our OCF taking a Real Break trip to Project Mexico in the spring of 2006. As pretty much the only consistent member of OCF remaining on campus the following year, I was ushered in as the de facto president when I was a sophomore. It was tough for me because I was still getting to know the campus myself, but my experience as president helped me really take ownership over the OCF experience and believe in its importance. I passed on the presidential duties in the years after that, but was still often in attendance.

Chris: I went to the University of Pittsburgh, so I was active with the Pitt-CMU OCF, went to college conferences, and did 2 real break trips in Guatemala (07) and Mexico (08).

OCF: How did you decide to dedicate your work to OCF?

John: As I said above, the idea of *Ncense seemed to develop organically from our love of the church and our friendship with each other. The idea of doing recordings was encouraged by our family and friends. Deciding to donate the proceeds to OCF was the easy part. OCF has played a part in all of our lives, through local chapters, Real Break, and College Conference, and we wanted to see it flourish. And to be able to take something that was given to us for free and turn it into something meaningful is part of our calling as followers of Christ: “Freely you have received, freely give.” And the parable of the talents also guided us to the decisions we made. I won’t presume to say we were given ten talents or five or one. Some might listen to our music and say, “What talents?”, and that’s okay! But we always said that if our music helped one person to pray, then it was worth it. And if we made a few dollars for OCF, then it was worth it.

OCF: Where are you all now?

John: We’re still all over the place. I’m working as the Youth Director at St. George Orthodox Church in Boston. Charles and Nick Abdelahad are teaching in Kentucky and Florida respectively. George does undercover work for the government, very hush hush. Nick Holwey just finished PA school. Chris is out saving the world somewhere. And the rest are still in school.

Chris: John got this pretty accurate, with the exception that I am not saving the world. Rather, I just took the job as Program Director at the Antiochian Village Camp. My brother Stephen Shadid is finishing his pharmacy degree at Duquesne University (and will hopefully contribute to his brother’s retirement!).

OCF: How did your experience with OCF and *Ncense develop you as an Orthodox Christian?

John: I think each person, especially those born into Orthodoxy, comes to a time in their life that they have to take their faith upon themselves. For many people, college is a time when we’re away from home, no one is telling us to go to church. We have to decide for ourselves to embrace Orthodoxy and a life in Christ. OCF helped me to start exploring the world of my faith. To be honest though, these are decisions I still struggle with today: to live Orthodoxy, to emulate Christ-like love, to give thanks to God in all things. But my experiences through OCF equipped me to face these struggles and to “run with endurance the race that is set before us.”

Chris: Staying active in the Church through OCF was instrumental to me because it helped keep me grounded through college. It introduced me to a new network of friends, and gave me opportunities to go on mission trips that were wonderful experiences.

To find out more about *Ncense, check them out on Facebook or email them at NcenseCD@aol.com. You can purchase their albums on iTunes.