Orthodox Music: A Reflection on Treasured Moments from CC East 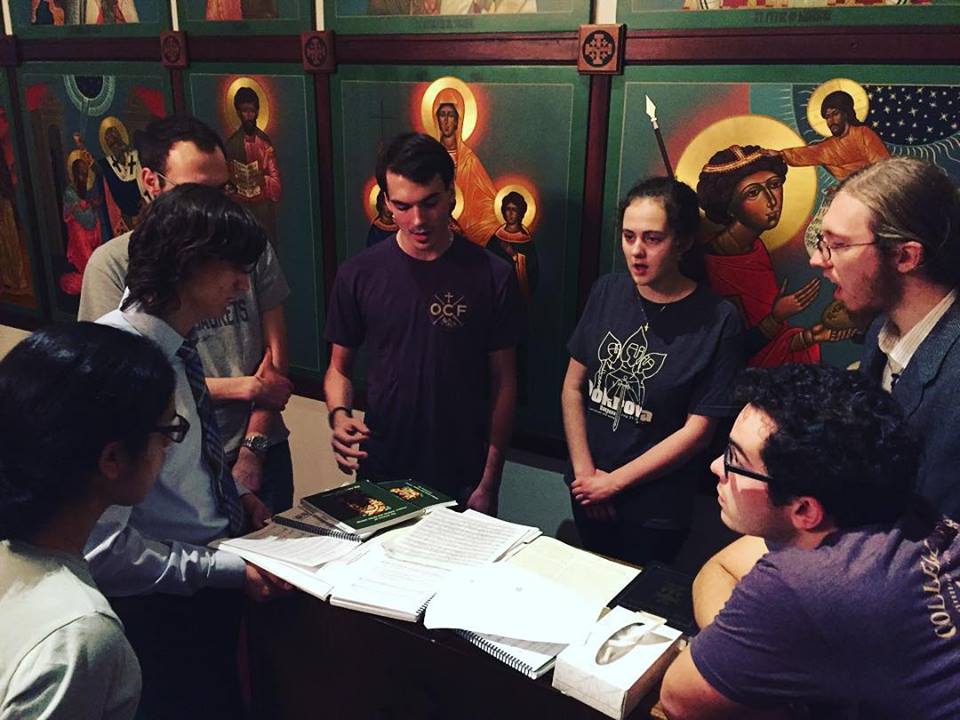 My most joyful moments of College Conference East were spent in the Chapel after Compline. There was a little over a half hour of time following the service where no one would leave. The priest would give the final blessing, but everyone decided to stay and sing a while longer. During that time, there was this incredible tension. We all wanted to go and spend time with our friends, go for a Sheetz run, or grab some much needed sleep, but it suddenly became a struggle to leave Church. For a short period of time, our earthly cares had been silenced. Growing closer to Christ and spending time worshiping Him became more important than anything happening in the outside world. Those were the happiest moments for me. That small segment of the conference when all of us chose to devote our attention to Christ a little longer than was asked of us.

After about a half hour the crowd slowly started to disappear, but it often wasn’t until 4:00 a.m. that the last group left the chapel. Throughout the entire evening, we would take turns singing hymns in the languages of our ethnic backgrounds or would occasionally break out into Christmas carols so everyone could sing along. (I like to think the Christmas carols were our way of bridging the gap between New and Old Calendar.)

At times, the beauty of the sounds in that little Chapel were overwhelming. So much so, that I frequently stopped singing because I had tears in my eyes and a lump in my throat. Admittedly, there were probably a few occasions when we paid more attention to the blend of our harmonies than the words we were saying. However, I think it’s safe to say that the real reason we stayed and kept singing so late into the night was because we recognized the fact that we have a God who is worthy of continual praise.

The theme of this year’s conference focused on becoming witnesses to Christ. How lucky we were to spend four days in an environment that made our task as witnesses so effortless. I wasn’t ready to leave. I didn’t want to give up the life I experienced while I was surrounded by over 300 other Orthodox Christians. I wanted to continue singing hymns and Christmas carols until 4:00 a.m. every night for the rest of my life. It truly felt like a beautiful little taste of paradise. Although the ease of Christian living was wonderful while it lasted, the reality is we’ve all returned to places that don’t necessarily make three church services a day a priority. I pray that everyone who attended CCEast this year will remember those awesome moments when they encountered Christ and the Theotokos. We should tell other people with excitement about just how wonderful those four days were. Not to brag or make anyone jealous, but to potentially make someone think, “I want what they have.” Retelling the stories of our days at CCEast is a way we can all be witnesses to Christ in our everyday lives.

Once I’m back at school, I plan to tell my friends all about those treasured moments I experienced after Compline. May God give us all the courage to share those special moments with everyone we encounter. May our strength be renewed each time we remember those spiritually charged days, and may those who hear our accounts be drawn closer to the truth of our Lord and Savior.

Christ is among us!

He is and always shall be!

Irene Grysiak is a junior at Saint Francis University in Loretto, PA. She is in a five year program studying to be a Physician Assistant. She spent the past two summers working as a counselor at Camp Nazareth and loved every moment of watching the campers grow closer to Christ.