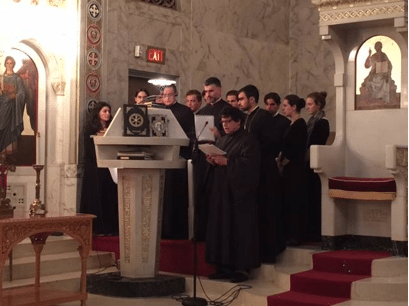 Learn to chant, so that you may experience the sweetness of the work,  for those who chant are filled with the Holy Spirit. – St. John Chrysostom

The history of the Greek Orthodox Church can be described as a history of prayer through song. Following the ancient Greek philosophers, the Fathers of the Church recognized the profound impact music has on souls and adopted it as a tool of instruction and edification. The music of the Church came to be known as the Psaltic Art and later as Byzantine music. The latter term is indicative of the paramount significance of Byzantium-Constantinople, the capital of the Eastern Roman Empire, in the genesis, growth, and development of this tradition.

Byzantine music is a strictly vocal, monophonic, a cappella tradition. In its fullest expression, it is performed antiphonally by two choirs standing at opposite sides of the solea. Each choir is comprised of a director (called Protopsaltis and Lampadarios for the right and left choirs respectively), a number of melodists who chant in unison, a number of isokratae who hold the ison, i.e. the fundamental note in a given melodic context, one or more soloists, a canonarch who intones the verses of the hymns, and a reader who recites or intones biblical pericopes and certain liturgical texts. The musical settings are composed in the four authentic and four plagal Byzantine modes, each of which has its own scale, tonic, structural notes, melodic contour, range, melodic formulae, etc. These characteristics lend each mode a particular feeling or expression. For example, the first mode is associated with joy in Christ’s Resurrection, the second mode with mild sorrow as well as fervent prayer, etc.

History of the Psaltic Art

The history of the Psaltic Art can be traced through the elaborate and majestic ceremonies in Hagia Sophia and other cathedrals and monasteries of the Eastern Roman Empire to the simple, unadorned hymns of the early Church. Initially, hymns were composed along with their own music, but after the emergence of Byzantine musical notation in the 10th century, composers started setting pre-existent texts to new music. Out of the approximately 1,000 known composers, two figures stand out for their remarkable proliferation and overall contribution to the development of psaltic compositional technique: St. Ioannis Papadopoulos Koukouzelis (13th-14th c.) and Petros the Peloponnesian (18th c.).

To become a cantor, one needs to study Byzantine notation, which is made up of neumes and other signs that are primarily derived from the Greek letters and diacritics. Being a cantor also presupposes intimate familiarity with the contents and usage of liturgical books and service rubrics. Holy Cross Greek Orthodox School of Theology offers a comprehensive training program that culminates in the awarding of a Certificate in Byzantine Music to students who have developed a mastery of the art. Additionally, formal instruction is offered at St. Vladimir’s Orthodox Theological Seminary, in schools of Byzantine music at several Metropolises of the Greek Orthodox Archdiocese of America, and in numerous parishes throughout the United States.

Setting of Pasapnoarion in the plagal first mode by Nicholas Roumas

The Liturgical Function of Chanting

While it is certainly meant to provide aesthetic pleasure to the listeners, the primary function of chanting is to make manifest the grace that resides in the sacred hymnology. Rather than being an art for the sake of art, Byzantine music is the ‘liturgical garment’ with which the poetic text of a hymn is vested. This liturgical aspect of music has a threefold purpose: first, to penetrate the soul of the faithful in a way that mere speech can’t and, by extension, to make the doctrines of the Church easier to instill in the hearts of the people; second, to expand and transform the words from means of exchange of information between humans to vehicles of communication between God and man; and third, to facilitate the sanctification of the praying community. According to Elder Timotheos Tzanis of Crete (1928-1991),

The cantor who chants with the grace of God is captured by the Holy Spirit, he does not live in this world, he ascends to the heavens! And he imparts this grace to the entire congregation! If only we had eyes to see the rays of light that come out of the cantor’s mouth and fall on the heads of the faithful!