New Podcast! “The Art of Prayer” with Fr. Antony Hughes

Listen in to hear College Conference East 2016 workshop speaker Fr. Antony Hughes share our understanding of prayer and some practical advice on how to pray.

New Podcast! “The Journey of Salvation” with Fr. Nicholas Belcher

Listen in to hear College Conference East 2016 workshop speaker Fr. Nicholas Belcher describe the Orthodox understanding of what it means to be saved and who Jesus Christ really is. 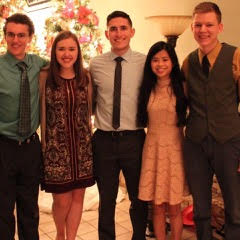 College Conference East 16 | Who Wouldn’t Want To Be Orthodox?

This past College Conference East was my fourth. I have attended every year since I was a freshman and have many wonderful and fond memories of the years past. I go to see my friends and to learn from the gifted speakers. Beyond that, however, I go for the community, and not just the social community, but a community that exists beyond the social one. You see, College Conference offers a unique tribe of varied, but also singular people. When I say singular I mean that everyone in attendance is of similar age, education status, and, more importantly, is a zealous Orthodox Christian. By varied, I mean we all come from different backgrounds: a number of attendees are Antiochian or Greek, Carpatho-Russian or OCA, and even more from a number of jurisdictions. We come from all over the U.S., but we all come because of God’s importance in our lives.

For me, having not gone to an Orthodox camp as a child, the existence of this community of fervent Orthodox college students astounded me my first year of College Conference, and I return every year to experience it again and again and to delve deeper year after year. College Conference has become a mainstay in my yearly schedule because it never ceases to deepen my faith and zeal, mostly through participation in the mystery of the Orthodox faith.

During College Conference, this community (a whopping 275 this past December) squeeze into the tiny chapel for Compline every night at 11 pm, sing hymns until 1 am or later, and then are up and alert by 8 am for Orthros. Who does that? Besides monastics, the College Conference East tribe, that’s who. Until I went to College Conference, I never even considered that such an activity could have that sort of appeal.

The extraordinary power of College Conference originates from our communion with God and with each other for a glorious three-day period. All of us, from all over the country, are on a small, but fundamental spiritual journey together as one. Yes, the cycle of services every morning and evening can get tedious, and I did nearly doze off during one of the workshop sessions, but nonetheless I drove home that last day with a sense of fulfillment and possibility. College Conference has shown me over the years that Orthodoxy and religion can be rejuvenating and not just a slog through weekly church services (as it was for most of my childhood), but an active, thriving religion, deep with nuance and truth; it asks much of us, but gives so much—an infinite amount—in return. After College Conference I wonder: who wouldn’t want to be Orthodox?

Ethan Comfort is a senior at Kent State University where he pursues his Bachelor’s in Chemistry. He is active in his OCF chapter as Treasurer and also acts as the District Leader for the Eastern Ohio District. He lives with his family on a small farm in Canton, Ohio.