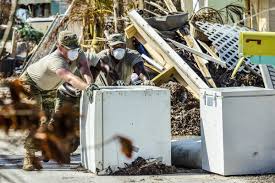 Giving in a Time of Crisis

It’s really, really tough to be a college student in a time of crisis.

I’ve been thinking about this a lot recently–how could you not? In the football-related work that I do, I interact with a really large network of people around the country–which is awesome, but also quite eye-opening. As such, I worked directly with a few people who had to evacuate and experienced flooding during Hurricane Irma; because it’s football work, I was exposed a ton to Houston Texans’ J.J. Watt’s national campaign to raise money for Houston following the devastation of Hurricane Harvey; a lot of media folks live in California, where fires have been burning homes and polluting the air; and that doesn’t even touch those in Puerto Rico, many of whom are currently without clean water.

Things are not good on the natural disaster front.

As a college student, this can be incredibly frustrating. Perhaps you’re fortunate enough to have the funds with which you can make a monetary impact on these events as each arrives–if so, count your blessings. I would venture to say that many of us aren’t there.

The question becomes, of course, what can we do? I don’t have a comprehensive list, nor am I well-versed in all of the various opportunities/outlets that exist (please comment below and on social media with cool stuff you do), but I can tell you about what I think and what I’ve done.

I think it’s very easy to forget that our greatest agency, whether we can give $1 or $1,000, isn’t in the money we give, but rather our prayers. And we really have to be careful of muddling that priority list: reducing prayer to “well, at least I’m doing this” or “well, I can’t really give that much, so I’ll pray instead.” Because donations are more publicly visible, more empirically tangible, they feel more impactful.

When you give money online to relief funds, bright little graphics pop up, and you’re thanked by the program and so on. Why? To make you feel that initial jolt, that rush of altruism. When you pray for the suffering, when you pray for the first responders, when you pray for the safety of the world, you’re usually rewarded by the same stillness and silence of the room in which you are. Little emoji prayer hands don’t start popping up, as if you’re gaining experience points in some video game.

The hope is, of course, that your prayer is so fervent and heartfelt that you might truly experience, viscerally, that interaction you just had with God’s grace and mercy. The reality–at least for me–is that I’m not nearly a good enough supplicant to regularly have that experience. And, as such, it is easy to feel effete and irresponsible–like we are not doing enough. But there is nothing we can do–mankind, in all of our combined efforts–that holds a candle to what the Lord can do, through his long-suffering and compassion. It is important to remember this. 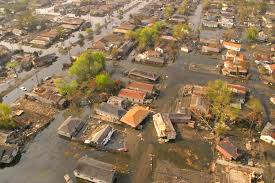 It is also important, however, to do what we can in the world with our resources. Remember the tale of the man on the roof in the flood who denied the boat and the helicopter and the rescuers, because he was so faithful God would save him. When he died and saw God, he asked why God had not rewarded his faith: God said that He had…with a boat and a helicopter and rescuers.

So, what can we do, in the face of our limited resources? The first, easiest answer is to give what we can. Sure, one college student may not offer much–but there’s quite a good deal of us in OCF, you know. Through our community, our efforts are multiplied.

We can also recognize that immediate aid to places in dire need, while primary and necessary and invaluable, isn’t the only aid. On Real Break New Orleans this past March, a few of my fellow students and I toured through the Lower Ninth Ward, beholding destruction you wouldn’t believe happened twelve years ago. OCF offers many activities that are service-based–primarily a giving of time, rather than a giving of money–throughout the year, including YES College Days and Real Break trips.

Finally, I think it’s important to do little things–no matter how small. Not simply for the sake of it–just to say you did–but because, as an Orthodox Christian, giving to those in need should become a fixture of your life. Remember, the values and habits you construct now follow you into adulthood–without a dedication to helping those in need now, you’ll struggle to develop the habit when you have the resources. Using small, convenient outlets like freerice.com or Charity Miles help you have a consistent impact, without putting you in a financial bind.

Welcome to college: with an increase in choice comes an increase in responsibility. One of my favorite Bible quotes comes from Jesus (shocker), when He was hyping the disciples up in the upper room before His Crucifixion–I’ve probably told this to every camper I ever had:

If you know these things, blessed are you if you do them.

You know things. But that isn’t enough. That just gets you to the battlefield–now, you’ve gotta do stuff, too. It’s time for action.