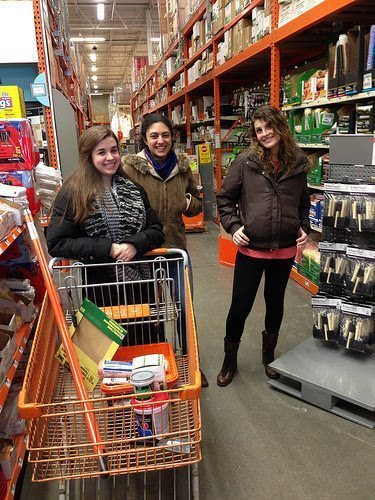 I have never been to Detroit before this week. This is my senior year of undergrad at Temple University. I love North American OCF and our campus chapter that we revived during my freshman year. Meeting and engaging with Orthodox students within my own university gives me a lot of joy and strength. Those feelings are amplified when we all connect on a greater level though OCF. North American OCF’s programs are such a blessing. I love Day of Prayer, and I got to go to College Conference East last year. However, I have always had a heart of missionary work, and so for my last year, I was determined to go to Real Break.

By the time registration for Real Break in September 2013, I was logged in and ready to go right at 12pm. I knew Temple’s spring break would be the first week in March, and that OCF was offering Real Break trips that week in Honduras or Detroit. I have heard amazing things about RB Honduras with the gift of helping the wonderful children there. I could have gone, but there was something about RB Detroit. It wasn’t that I was looking at the cost, because I knew I could (and did) fundraise enough to cover the trip. But Detroit, Detroit is serving those in “my own backyard”. On the first of March, I met my Real Break team at Saint Andrew’s House. With only three OCFers, our trip leader, and Jen, OCF’s Executive Director, we are a relatively small size group of ladies. Jen had to leave the trip a bit early on Monday morning, and though we miss our boss-lady, by that time we’ve connected a lot as a group. I don’t see there just as Real Break team members, but as good friends and sisters-in-Christ.

So much has gone on within the last few days that I can’t believe that it’s only Tuesday night. We’ve had some great Arabic food in Dearborn, celebrated Liturgy and St. Andrew’s Great Canon with the Saint Raphael’s Orthodox Church, and made great relationships with those connected to the community of Saint Andrew House. We have seen the blight and abandonment in the city of Detroit to both its landscape and its people. There are areas of the city that look like zombie city and we’ve seen people shivering in the streets holding up cardboard signs for help. And at the same time, we have witnessed and contributed to the City of Detroit fighting back. Through Orthodox Detroit Outreach (ODO), we’ve made emergency kits and meals for those in needed. We’ve sat, talked, and listened to the homeless that we got to serve lunch to at Saint Peter and Paul’s Church, as well as played and connected with some of the children that came to that meal. We painted murals to beautify the abandoned and empty homes in the Brightmore community.

After reading through and contemplating James chapter 1 together, I could not ask for a better way to start off Great Lent. Through the trails and temptations that we see and face here in Detroit, I see Christ in the eyes and hearts of others as we serve them.

But be doers of the word, and not hearers only, deceiving yourself     –James 1:22

There is so much to talk about, but yet so much to still do. I’d love to write more tonight, but my friends are spackling and sanding the kitchen in Saint Andrew House that we are painting this week without me, and I really want to go help and be a part of that work. A Blessed Lent!

This is a guest post from Anastasia Nicoloudakis. Anastasia is a senior at Temple University where she serves as the OCF chapter president. Real Break Detroit was her first Real Break experience.

Real Break Detroit is under way, and you can get the latest update from the field by listening to this podcast on Ancient Faith Radio: