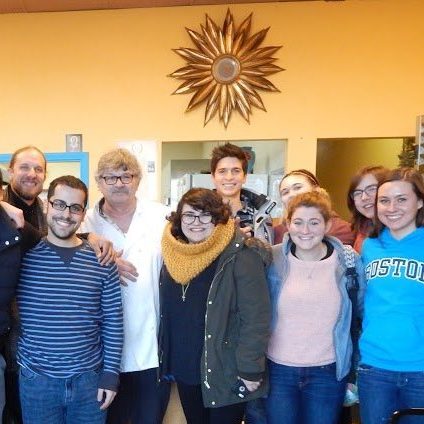 I like to tout to the Orthodox World that OCF is the only fellowship organization (for now) which is an Assembly of Bishops agency. Who cares, you say? Well, we are the only organization (for now) that is charged by all the bishops to bring together all Orthodox Christians from all backgrounds and all jurisdictions and to do it well. This means we’ve been “doing pan-Orthodox” for a while now, and there are a few lessons we have learned that I’d like to share.

“Behold, what is so good or so pleasant as for brothers to dwell together in unity.”

This week is the beginning of a six part series centered around Orthodox perspectives on unity. The series will consist of reflections from student leaders and College Conference workshop speakers, leading up to College Conference at the end of December.


This is a guest post from Eddie Ryan, Social Media Student Leader on the 2013-2014 Student Advisory Board and a graduate student at the University of Connecticut. Eddie got involved with OCF at school during his freshman year and converted to Orthodoxy in 2012. He is currently studying Biomedical Engineering, and this is his first year on the OCF Student Advisory Board.

When we receive the sacrament of communion, we are united, through Christ, to all Orthodox Christians: past, present, and future. We are bound together in our faith, the fundamental beliefs by which we interpret the world around us. We are also bound together in our purpose, to work to fulfill Christ’s “new commandment:” to love one another as He loved us. This concept of unity may seem straightforward in theory, as working together often does. However, experience tells us otherwise, dwelling in unity requires time, effort, and a great deal of patience.

The various jurisdictions of the Orthodox Church each have their own unique interpretations of the Faith, many of which are based on how different cultures interpreted the Church’s teachings. This has led to the development of different customs, different approaches to certain issues, and differences in methods of celebration. While these differences help to solidify the identity of a culture or community, they also promote division amongst the branches of the Orthodox Church. These divisions, and tensions that arise from them, have existed for generations. But efforts and changes in the mindset of recent generations of Orthodox Christians are causing some of these old wounds to heal.

This is not to say that the end goal is a single Church, devoid of ties to any group or ethnicity. Rather, it is that we can coexist peacefully and lovingly, that we do not question where an Orthodox Christian came from before they are welcomed into our parish or region. By finding a balance between the customs and traditions we hold dear and our charge to stand together as the true Faith, we are moving towards a time where we can truly say that we dwell in unity.