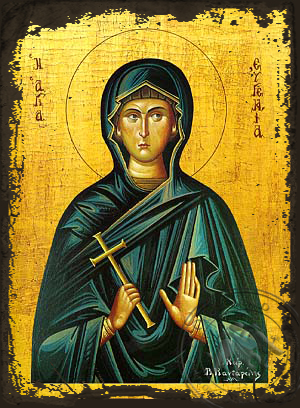 So October is Orthodox Awareness Month, and I thought, what better way to participate than to have the blog focus on the “superheroes” of the church that make this month possible. As Halloween is also approaching and kids are getting their superhero outfits, I thought it would be a fitting theme for October. We are going to hear about Holy People, both alive and dead, and I am super excited for what this month’s publications will bring!

I am going to kick us off with a personal favorite saint of mine, St Evyenia (or Eugenia) of Rome. Okay yes, she is my patron saint, but she is still super cool! So let’s dive in.

The Holy Martyr Evyenia was a Roman by birth. She lived in Alexandria, where her father Philip was sent by Emperor Commodus (180-192) to be Prefect of Egypt. Evyenia was noted for her beauty and good disposition. Many illustrious youths sought her hand, but she did not wish to marry anyone, for she was determined to preserve her virginity.

She became acquainted with the Epistles of the Apostle Paul, and yearned with all her soul to become a Christian, but kept this a secret from her parents. During that time, Christians were banished from Alexandria by the command of the emperor. Wishing to learn more about Christianity, she asked for permission to visit one of the family estates outside the city, supposedly to enjoy the countryside. She left with her two servants, Protus and Hyacinthus, dressed in men’s clothes. She and her companions were baptized at a monastery by Bishop Elias, who learned about Evyenia in a vision. He blessed her to pursue asceticism at the monastery disguised as the monk Eugene.

By her ascetic labors, St. Eugenia acquired the gift of healing. Once, a rich young woman named Melanthia turned to her for help. Seeing “Eugene,” this woman burned with an impure passion, and when she was spurned, she falsely accused the saint of attempted rape. St. Eugenia came to trial before the Prefect of Egypt (her father), and she was forced to reveal her secret. Her parents and brothers rejoiced to find the one for whom they had long grieved.

The entire family accepted holy Baptism. Philip, after being denounced by pagans, was dismissed from his post. However, the Christians of Alexandria chose him as their bishop. The new Prefect, fearing the wrath of the people, did not dare to execute Philip openly, but sent assassins to kill him. They inflicted wounds upon St. Philip while he was praying, from which he died three days later, so her dad was also a saint, how cool is that.

St. Evyenia traveled to Rome and continued with monastic life, bringing many young women to Christ. She, along with St. Claudia, built a wanderers’ hostel and aided the poor. After several peaceful years, Emperor Galienus (260-268) intensified the persecution against the Christians, and many of them found refuge with Sts. Claudia and Evyenia.

The pagans dragged Sts. Protus and Hyacinthus, her servants, into a temple to make them sacrifice to the idols, but just as they entered, the idol fell down and shattered. The holy Martyrs Protus and Hyacinthus were then beheaded. They also brought St. Eugenia to the temple by force, but she had not even entered it, when the pagan temple collapsed with its idol. They threw the holy martyr into the Tiber River with a stone about her neck, but the stone became untied and she remained unharmed. They then cast her into a pit, where she remained for ten days. During this time, the Savior Himself appeared to her and said that she would enter into the heavenly Kingdom on the day He was born. When this radiant Feast came, the executioner put her to death with a sword. After her death, St. Eugenia appeared to her mother to tell her the day of her own death (information taken from http://ww1.antiochian.org/node/17207 and stories from my mom).

Okay, so is she not one of the coolest people ever. I was thinking about how she had to stumble across the epistles of St. Paul, and I realized how fortunate I was to be able to actively read the bible without facing persecution. As one of the readers of the Epistle at my local church, I have access to people who lived with Christ! St. Evyenia didn’t have that same luxury. She had to run away to become acquainted with literature concerning Christ.

So, why is she my superhero and a superhero of the church? Well, for starters the fact that God delivered her from her persecutors is amazing. It reminds me of the Psalms we sing in vespers, “Deliver me from my persecutors for they are stronger than I”. Another reason she is a superhero of the church is that she was able to perform miraculous healings! I truly believe that she and St. Pelagia were kick starters for women monasticism because they both disguised themselves as monks. I recently went to the Holy Dormition Monastery in Rives Junction, Michigan (mother Gabriella is the Abbess). We were in church a lot, and I looked up during one of the services and right next to me was a huge icon of St. Evyenia, honestly bigger than I am. I realized that while she is one of my superheroes, she is also a superhero to nuns and monastics everywhere. After talking with mother Gabriella, I discovered that it is not rare to have an icon of her at a women’s monastery. Also, she was a princess. A costume most girls dress up for Halloween in, and something every little girl most likely wants to be.

My family celebrates the feast day of the patron saint, almost more than we celebrate birthdays, we have parties, no joke. The hard thing with St. Evyenia though is that she is celebrated December 24, so the parties usually have fasting food (a real tragedy because my brother gets lamb). But another reason she is my superhero is because I got presents on the 24 for my nameday and then presents on the 25 for Christmas!

As we delve into more saints the rest of the month I challenge you all to either learn more about your patron saints, and/or learn about different superheroes of the church!