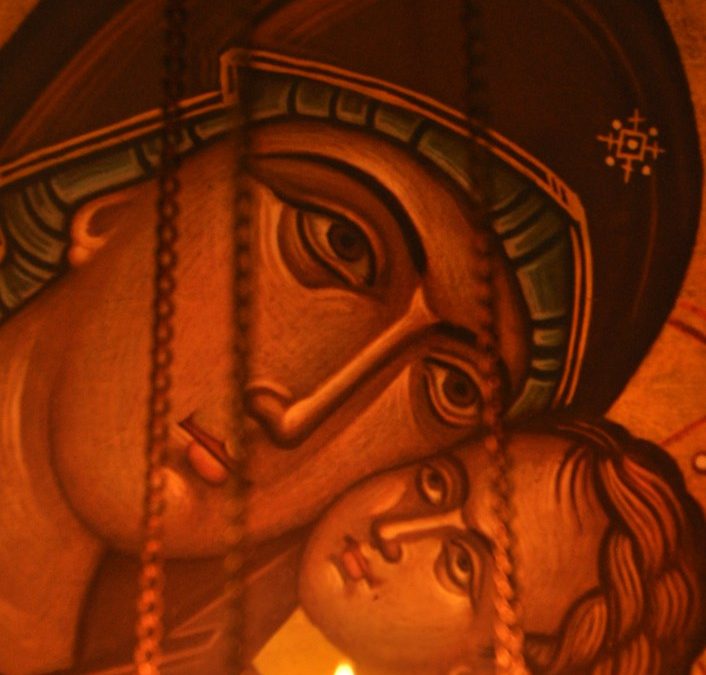 The Birth Giver of God: My Superhero

Every day, or at least most days, I read the life of one of the saints being commemorated. As we hear in the Divine Liturgy, this includes “forefathers, fathers, patriarchs, prophets, apostles, preachers, evangelists, martyrs, confessors, ascetics, and for every righteous spirit made perfect in faith, especially for our most holy, pure, blessed, and glorious Lady, the Theotokos and ever-virgin Mary.”

Though I’ve taught about many saints and have a devotion to many more, it is probably the Mother of God who is most important to me.

My relationship with the Mother of God began in college which was a hard time for me.

Like many undergraduates, it was the first time I was away from home. While new people and my classes were interesting, they were also challenging. To be honest, especially in my freshman year I wasn’t up to the challenge.

My grades were bad. I didn’t know how to study. And while I did very well in high school college meant sitting in classes with people who had done at least as well, and often better than I did. I simply didn’t understand that last year’s high school “A” was this year’s college “C.”

Because of this, I felt bad about myself. Added to this, I was shy and pretty insecure in my new environment. As a result, I was terribly lonely and probably more than a little depressed.

One consolation I had was that the campus chapel was always open. I would frequently spend time there praying and thinking about my life.

On the left side of the chapel, there was a statue of the Virgin Mary (I attended a Catholic university, so our chapel had statues). I would often sit in front of the Mother of God and simply talk to her. And I would talk for hours.

As our conversation unfolded, as I read the Scriptures, studied more theology, and began to understand more about life, I came to appreciate the strength and faith it took for Mary to say yes to God.

Here was a girl who when she was younger than me agreed to carry the Son of God. Me? I was having trouble remembering to say grace before I ate or to get up in time for church on Sunday morning.

But Mary? Mary said yes to God and, in doing so, played a role in the salvation of the world!

But like me though, Mary sometimes struggled with following Jesus. St Luke tells us she was troubled by the angel’s greeting. She was often unsure about what her Son was doing. And, of course, she stood at the foot of His Cross and watched Him die for the life of the world.

She was able to do all this because “she pondering in her heart” the things she heard and saw. Mary was a woman of deep prayer.

Now as a priest, I will often tell people to look at the Mother of God as an example of what it means to be a follower of Jesus Christ. Not only is she the first disciple of Jesus, but she is also the first evangelist.

I work to draw close to Him but He came to live in her.

I tell people about Jesus; Mary gave birth to Jesus.

Like her Son, Mary did all this for our sake. And so, I tell people, go to the Mother of God not simply as an example of how to live the Christian life but for help in being a Christian.

Let me tell you a story about this last point.

Years ago, a woman came to me about becoming Orthodox. Her husband REALLY, REALLY wanted to become Orthodox but she wasn’t sure. She was raised in a black Pentecostal church and so she had a lot of theological questions. She also had some concerns about joining a largely white community. She wondered, reasonably enough, if she and her biracial children would be accepted.

After we talked for a while, I pointed to the icon of the Mother of God on the iconostasis. I told the woman the story I just told you and suggested she talk to the Virgin Mary about her fears. “Talk to Mary like she was your mother.”

She hesitantly agreed and I went back to my office.

About 30 minutes or an hour later, she came into my office. I looked up and asked her what was on her mind.

Looking straight at me and she said, “Mom says I should become Orthodox, it will be ok. Oh, and my new name is Monica, St Augustine’s mom.” Augustine is another of my favorite saints, but that’s a story for another day!

Feasts of the Mother of God are always a joy for me. When I serve them, I remember what it was to be a scared, 18 year old freshman far from home and at the start of a new life.

Throughout that life, which for all its bumps, bruises and set back has, thanks be to God turned out pretty good, the Mother of God has been there with me. Yes, sometimes I forgot she was there or didn’t appreciate her as I should have. But the Theotokos never forgot me.

May Christ our true God, through the prayers of His most holy Mother, bless, protect and keep us all as we follow Jesus as His disciples and witnesses on our college campus! Fr. Gregory Jensen, Ph.D. (Duquesne University) is a priest of the Ukrainian Orthodox Church-USA and a professor at St Sophia Ukrainian Orthodox Theological Seminary where he teaches social ethics and young adult faith development. Currently, he is the priest of Ss Cyril & Methodius Orthodox Church. The parish is located on the campus of the University of Wisconsin-Madison. He is also the Spiritual Advisor for the OCF at the University of Wisconin-Madison