Why Should You Attend College Conference Midwest? The Speakers Speak 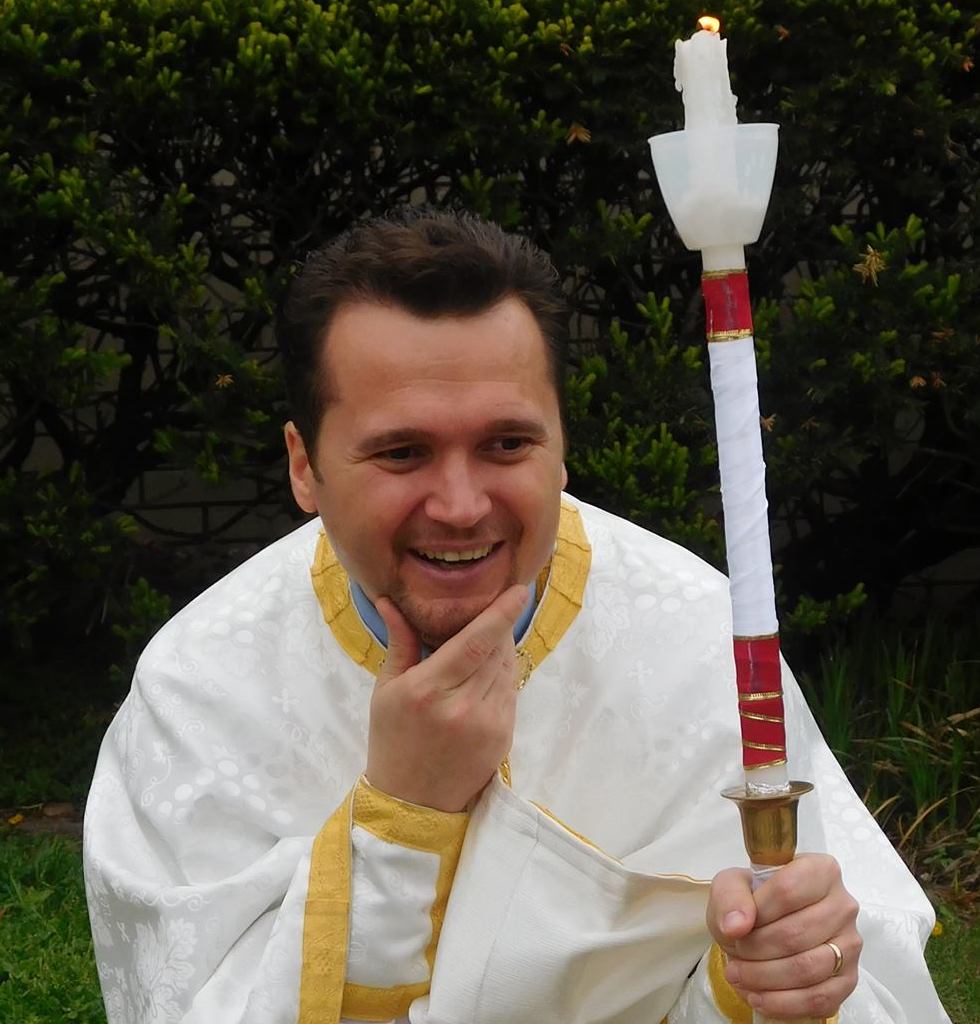 Fr. Panagiotis Boznos is the Proistamenos of Saints Peter and Paul Greek Orthodox Church in Glenview, IL. He was born and spent most of his childhood in the Chicago suburbs, before attending the University of Oklahoma, where he received his BA in 2008 in Religious Studies and Classical Greek. He then went on to receive his MDiv from Holy Cross Greek Orthodox School of Theology. While a student at Holy Cross, Fr. Panagiotis met and married his wife, Presbytera Nichole. They have two children, and have been serving the community of Saints Peter and Paul since the summer of 2013.

Fr. Panagiotis–you are the keynote speaker! Why are you excited to speak to the Conference’s Theme of “Come and See” (John 1:39)?

“I am excited to speak on the theme ‘Come and See’ because it is the invitation that both Christ and His disciples use (John 1.38-51). Christ calls His followers to Himself using these words, and those who hear it make that same invitation to others. ‘Come and See’ is at the same time a personal invitation for our own salvation in Christ and a responsibility of the Christian to draw others toward salvation, as well. These words, and they way in which they are used, mean that we must be transfigured and sanctified in Christ and that our sanctification is not complete without the salvation of our fellow man.” Fr. Gabriel is the rector of St. Mary Magdalene Orthodox Church in Fenton, Michigan.  He live in nearby Linden, Michigan with his Matushka Laura and two beautiful children, Lucy and Noah!

He grew up in Akron, OH and was a member of St. Elia Orthodox Church of the Orthodox Church in America.  After spending ten years in the banking industry, his wife gave him the blessing to go and pursue a seminary education, and further discern a calling he had received to the priesthood.  After graduating from St. Tikhon’s Seminary, he served in a Russian Patriarchal Parish in Youngstown, OH while he awaited assignment from his diocese. He has been at St. Mary Magdalene since February, and he and his family cannot picture themselves anywhere else!

Having been a member of OCF himself, and having also attended the conference at Antiochian Village, he knew how important it was to have a vibrant local OCF for our college students. One of the first priorities in coming to the Fenton area was to establish an OCF in Flint. He has a fantastic group of college students from the four area Orthodox churches who worked hard in getting this new chapter established, and he am extremely excited at the possibilities!

On what topic will you be speaking? Why will your topic be interesting/helpful to college students?

“The title of my workshop is ‘Living Sacramentally.’ College was a confusing time for me. Although I never left the Orthodox faith, there was a time when I allowed the pressures of college to get to me, causing me to change the priorities in my life. I lost sight my role as an Orthodox Christian, and allowed the temptations of the world to overwhelm me.

What I hope to share with the students, is just how important their roles are as Orthodox Christians in the world…especially as students. Life presents so many challenges which cause us to lose our focus on Christ. St. Theophan the Recluse calls the battles within ourselves ‘unseen warfare.’ I hope to enhance the students’ understanding of the armor and weapons they were given (specifically baptism, chrismation, and the Eucharist) to fight in that war…making sure they end up on top.”

“I love meeting new people and sharing ideas!  I gain inspiration and strength by hearing stories of how others are coping in this ‘unseen warfare!'”

“I would recommend students to come to the conference for the very last word in ‘OCF’…fellowship!

One of the great things that the OCF does is create a system to hold individual students accountable to each other. You make lifelong friends who you can journey through the difficulties of college life with!

Let’s face it, college (and the years immediately after) are an extremely vulnerable time for students and their faith.  The percentages of Christians who abandon their belief in Christ during this time in their life are staggering!  By having an organization like the OCF, students can reach out to their friends who are struggling with their faith, pray for them, and give them strength to endure the hardships that come with college.” Fr. Ciprian Sas was born in Timisoara, Romania in 1975. When he was 13 years old, his parents fled communist Romania with secret plans and trust in God that they would be reunited with their five minor children (ages 3-15) in the “free world.” Following eight to ten months of pressures from the International Red Cross on the Romanian Communist Government, he and his siblings were reunited with their parents in Sweden, where they lived for a year before moving to Canada. Fr. Ciprian received his theology degree from St. Andrew’s College in Canada, a Masters in International Business from St. Mary’s University in Minnesota, and a PhD in Educational Psychology from the University of Nevada, Las Vegas. His Presbytera Dr. Magdalena Sas and Fr. Ciprian have three children: Elijah (13), Emanuela (11), and Isaiah (8). Fr. Ciprian has served St. Andrew’s Church in Las Vegas, NV for three years, St. John the Baptist Greek Orthodox Church in Cedar Rapids, IA for almost seven years, and his current parish All Saints Greek Orthodox Church in Peoria, IL for four years.

What will your workshop cover?

“In an attempt to deepen our Orthodox Christian understanding of Salvation, my workshop will address numerous topics directly related to our salvation, such as faith, heaven and hell, sin, suffering, sacrifice, blessings, prosperity, good works, life in Christ, and acquisition of the Holy Spirit. The Orthodox Christian doctrines on these topics will be compared and contrasted to other Christian faiths and even other religions. The conclusion of this workshop will focus on everyday life behaviors and manifestations of an Orthodox Christian.” Fr. Kosmas Kallis is the Youth Director/Associate Pastor at SS. Peter and Paul Greek Orthodox Church in Glenview, Illinois.  He is originally from the home of the greatest hockey franchise in the United States, Detroit, Michigan: Hockeytown, USA.  He is the advisor to the OCF at Northwestern University and loves having the opportunity to get to know and be inspired by the young adults in the area.

On what topic will you be speaking? Why will your topic be interesting/helpful to college students?

“I will be speaking with my wife, Anna Kallis, on the topic ‘He Made Them Male And Female.’ I think the title says it all.”

“Bonfires. And s’mores. An spending time with inspiring, interested, engaging young adults of the Midwest.”

“I would say that without taking time to retreat over Christmas Break, a college kid will not truly have come ‘home’.  To really go ‘home’ for break means to come back to Christ.  If a student comes to CC Midwest, they will find Christ in their fellow students, in their discussions and lessons, and, most importantly in the chalice on Friday morning.” This is Peter Savas. Peter is running College Conference Midwest. Don’t you want to see this smiling face over your winter break?

Peter Savas is from the west suburbs of Chicago, specifically Holy Apostles Parish in Westchester IL. He is an active member in my OCF at Loyola University Chicago, and he is the student leader for College Conference Midwest!

Why did you decide to become CC Midwest leader?

“I always heard about College Conference, and I never got to go because it involved buying a flight, which around the holidays, was super expensive. So, when I heard there would be a College Conference opening up near Chicago, I was so pumped. I wanted to be a part of it, and help it be an amazing opportunity for college kids around the Midwest.”

“I think just the fact that this is the opening year is really cool. This is the year where we all can kind of set the stage and start traditions. We can really make College Conference into our own. I think it’s cool to be a part of something that will outlast you. And because it’s the first year of CC Midwest, we get that opportunity. All of us that go to College Conference are going to be pioneers. We can tell our kids when they go to CC Midwest that we went to the very first one. We started the tradition that they are looking forward to so much, and I think that that’s really cool. So, I think just being a part of something really cool and new is exciting to me.”

“College is tough. College is awesome… but college is tough. At least for me it is. I feel like when I’m at school I go into a bubble. I am so into whatever is going on around campus that I get lost in it. I kind of lose myself in the hustle and bustle of college. CC Midwest is an opportunity to recharge, refocus, and rejuvenate. It’s a place to regain perspective. It’s a place to ground yourself from the bubble of college. It’s a place where people can be genuine. Where people don’t have to worry about this or that or feel as though they have to act in a certain way. It’s an opportunity for a person to be authentic as themselves. I think that’s the most important thing that I really am looking forward to. I just can’t wait to be able to be genuine. That’s why I would recommend CC Midwest. Obviously it’s gonna be lit…but it’s an opportunity to be genuine with your friends, with yourself and with God. So, I think that everybody should come to CC Midwest, it is seriously gonna be awesome.”